How to Make Homemade Vanilla Extract

Did you know you can make homemade vanilla extract? It’s easy, affordable, and, most importantly, delicious! Plus it’s literally a perpetual supply with just the occasional refill, depending on how often you bake. I recently saw a video by Ina Garten on making homemade vanilla extract. She showed a jar with the most beautiful brown liquid in it and claimed she has kept that bottle of vanilla going for thirty years. THIRTY years!! That’s almost as long as I’ve been married! I like things that last. Plus, has anybody else noticed that vanilla is suddenly even more outrageously priced than ever??

Disclaimer: There are several product/store mentions and suggestions with at least one direct link. None of these are sponsored and I receive no kickbacks for anything mentioned. It’s just me, sharing my opinion and research.

My favorite bottle of vanilla extract at Costco is currently $34.99. I don’t drink alcohol, so I had no idea how much vodka would cost, but I figured there is no way the ingredients to make vanilla extract (vanilla beans and vodka or bourbon) – and factoring in how long it lasts – can be less cost-effective than that tiny bottle.

While I didn’t spend a lot of time bargain-hunting, I did some research at Winco and Costco. However, I didn’t want to just buy the first, expensive thing either. Between Winco and Costco, I figured I would have a pretty good idea of the range of costs and quality of products at most of my local grocery resources.

I started at Costco. They had a large bottle of vodka for $12.99. I have a 1.5-pint mason jar  (24 oz.)to put the vanilla in, so I figured with that bottle of vodka, I could make three or four jars. Cool concept if I had thought ahead about Christmas presents (it’s best to let the vanilla extract sit about six months before use), but I hadn’t. The vanilla beans at Costco are $15.99 for five beans. That’s about $3.20 per bean.

Then I headed next-door to Winco. The vanilla beans there were $9.81 for two. Yes, TWO. Which made their beans about $4.91 per bean. So, at this point, Costco definitely won the vanilla bean war.

As for the vodka, I found a smaller – but still large enough – bottle for $5.40. My research showed that as long as it’s at least 80 proof, any vodka will do.

I bought the vodka at Winco and then headed back over to Costco for two vials of vanilla beans – plus a couple of other things; it IS Costco, people! Besides I had walked back and forth between the two stores and needed snacks.

I happened to have a vial of vanilla beans I had purchased at Winco a couple of months ago for some homemade vanilla bean ice cream that never happened, so once I got home I did a quick comparison of beans:

Ummmm…. Wha….??? The straight across cost comparison between Winco and Costco just got a whole lot more complicated. Or simpler, depending on your point of view. For me, once I saw the difference in quality, The Costco won again. Praise to The Costco…

Technically the “recipe” calls for between 12 and 24 vanilla beans per jar of extract. I had three beans at home already (the Winco vials use to have three, but currently only have two), so I purchased two vials from Costco. That gave me a total of 13 beans. I plan to add a few more in a couple of weeks – after my budget recovers from the initial set up.

The actual process for making the extract is ridiculously simple. First, add 12 – 24 beans to a clean jar…

Make sure the jar is tall enough to handle the beans without bending or breaking. Also be sure there’s enough room between the lid and the beans so that the beans can be completely covered in the vodka.

If I factor in the cost of the jar, it cost just over $40 to get my vanilla extract going.  I have a bit of vodka left over to top off the jar as I use it. That gives me 24 oz. of vanilla extract for $40; about $1.67 per ounce. My favorite extract at Costco currently costs $34.99 and has 16 oz. in it; about $2.19. I’ve already saved some money! And everything I’ve read said the flavor is incredible. I’ll keep you posted on that. Better yet, try it yourself and let me know how it goes.

While you technically can use homemade vanilla extract after aging for as little as one month, every source I read said to wait at least six months for full flavor. After that, you can not only use the extract itself, but can snip off the end of the beans and squeeze out the seeds. I’m super excited for that first batch of Homemade Vanilla Bean Ice Cream this summer! 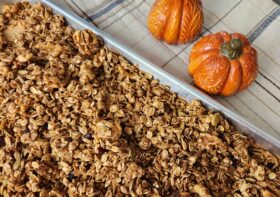 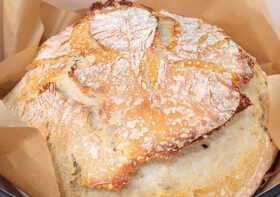 Getting Started with Sourdough

I'm Cori and I'm glad you're here. I thrive in finding joy and peace in the creativity of everyday life. My pages are full of tried-and-true recipes, artistic adventures, simple daily life tricks, organizational projects, and more. Click to learn more.